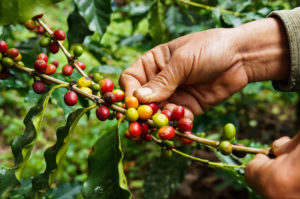 Brazil is a well known coffee producing giant. They source around one-third of the world’s coffee, making them the largest coffee producer in the globe! Of course, most of this is lower grade Arabica. However, this country is capable of producing specialty coffees.

The Sul de Minas is a traditional coffee powerhouse, where generations of small coffee farmers have cultivated hills with an altitude of 700m to 1200m. The main varieties of arabica grown here are Mundo Novo and Catuai, although several other arabica varieties can also be seen. The Sul de Minas is a strong producer of Group I sun-dried coffees. The strong presence of many cooperatives and exporters in the region means that the commercialization of Sul de Minas coffees is a smooth and reliable affair throughout the whole year.
Purchase Cities: Varginha, Tres Pontas, Carmo do Minas, Boa Esperanca, Machado.

The Zona da Mata, in the east of Minas Gerais, is a region with steep topography between 550m and 1200m, which means all harvesting and husbandry is done manually. Almost 50% of the coffee area here belongs to small farms below 10 hectares, compared to a 30% level in the Sul de Minas. Traditionally, because of a moist harvest climate, the Zona da Mata has been the biggest supplier of Group II coffee.
Purchase Cities: Mutum, Durandé, Manhuaçu, Ipanema, Manhumirim, Espera Feliz

Brazil’s second biggest coffee state produces almost 80% of the country’s conillon (robusta), mostly in the center north. In the south, arabica is grown, and Espirito Santo farmers have developed some very interesting washed arabicas on altitudes of up to 1200m
Purchase Cities: Brejetuba, Iúna, Ibatiba, Irup

Is located on what is assumed to be the crater of a volcano that became extinct millions of years ago. The land, which forms the starting point of the Mantiqueira Range, is extremely fertile, with altitudes between 3,000 and 4,700 feet. The climate is temperate, dry in winter, when the coffee is harvested, and very wet during the spring and summer seasons, when the blossoms appear and the beans form and develop. The terrain is very hilly, making it practically impossible to employ machines, 50 that agricultural work is carried out by manual labor. The crystalline sulphurous waters of the region have made it famous for its health- giving properties

The combination of all these factors gives the coffee grown in the Poços de Caldas region an unequalled sweetness and smoothness of flavor, a unique coffee in fact, one of the best in the world.